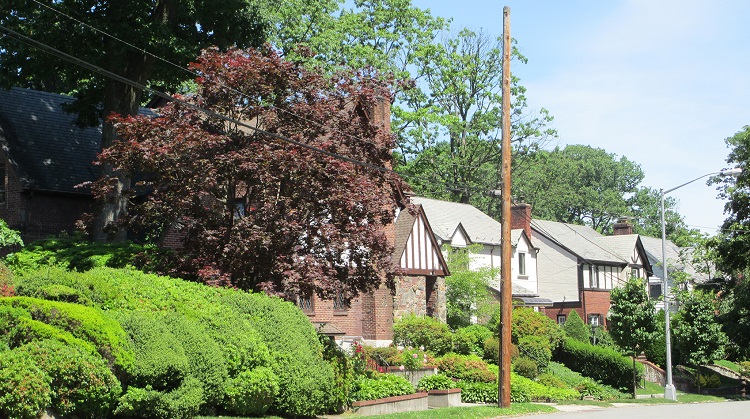 Jamaica Estates is an affluent, upper middle class neighborhood in the New York City borough of Queens. This enclave was planned by two real estate developers in the early 1900s to be a luxurious, suburban escape from Manhattan. Their goal: was to develop an affluent community in an English style that felt like it was in the country but came with easy access to the city, according to the Jamaica Estates Association which was founded in 1929, and continues today, as an active, vital civic organization representing the community.

Located within Queens Community District 8, Jamaica Estates is served by Queens Community Board 8 and located in the northern portion of Jamaica. Its boundaries are Union Turnpike to the north, Hillside Avenue to the south, Utopia Parkway and Homelawn Street to the west, and 188th Street to the east. The main road through the neighborhood is Midland Parkway, with no main commercial drag. But it does have a number of unique religious institutions that reflect the pervasive diversity of the borough of Queens. There are convents, a Hindu Ashram, a synagogue and a historic Catholic church.

The surrounding neighborhoods are Jamaica Hills to the west; Jamaica to the southwest; Hollis to the southeast; Holliswood and Queens Village to the east; and Fresh Meadows and Hillcrest to the north. The area offers some of the most impressive architecture in the borough. Its million-dollar homes and a plethora of trees through out the neighborhood full of historic mansions in a carefully designed, park-like setting, characterize this exclusive community. Because the developers designed thoughtfully to preserve the hilly land and as many trees as possible, the neighborhood is now dominated by 200-year-old maple, oak, elm and chestnut trees throughout the community.

Midland Parkway, a four-lane boulevard features a wide, landscaped median strip whose renovation was completed in 2007, is the area’s main artery. The most prestigious homes in the neighborhood occupy as much as a third of an acre and are single-family detached homes in the Tudor, Craftsman, Cape Cod, or Mediterranean styles. The “English” style of the community is most reflected in the architecture, dominated by Tudors. The streets have names meant to be evocative of an English village, too: Avon, Kent, Tudor, Chelsea, and Aberdeen. And it really was exclusive, with an Elizabethan-style stone lodge with giant pillars and gates that marked the entrance along Midland Parkway. The gatehouse, still there, now houses the Jamaica Estates War Memorial, although this is no longer a gated community.

Today residents still maintain the vision of the original plan developed 100 years ago. To further solidify Jamaica Estates’ reputation as a park-like neighborhood for the wealthy, the developers also built the Hillcrest Golf Course, spanning 100 acres, along the border of the neighborhood. (Forest Park bordered the other side.) St. John’s University purchased a portion of the land in 1936 for $550,000 and developed it into its main campus, which remains today.

Currently, although Jamaica Estates is primarily comprised of freestanding English Tudor homes, there is a mix of size, style, and prices. The only apartments and multi-family housing lie nearer to the southern border within a few blocks from and along Hillside Avenue. The shopping corridors are along Hillside Avenue and Union Turnpike. Although there has been some new construction; case in point: a “European villa” was constructed in 2012 on one-third of an acre, as there is no landmark protection in the neighborhood. Overall, there’s a limited market in Jamaica Estates, with pricey inventory located in this exclusive upscale, community.